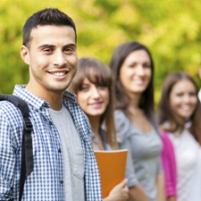 You’re graduating from high school and have plans to work or attend college, but aren’t sure what you want to do. Have you considered taking a gap year and have a break from the cycle of study-paper-exam for a while? A Norwegian folkehøgskole or folk high school is a great way to do this and set yourself on a path of personal development and learning for learning’s sake. The goal is to reflect on who you are and what you want to be. Other traits that may be built in the process are confidence, creativity, maturity, cooperation, attitude, and self-knowledge.

Folk high schools are a long-standing institution in Norway, dating back to the late 19th century. They were instituted by Danish educator N.F.S. Grundtvig who opposed the rote memorization associated with Latin academies, which he felt had little to do with daily life. The folk high school principle is to develop the whole person through dialogue and lecture, rather than cramming facts. The model is similar to a boarding school in that students and teachers all stay on a central campus. The classes range from non-academic and non-traditional subjects, and some schools offer academic subjects, but there are no exams and no degrees. Teachers are more like coaches, and curriculum is a co-production between instructors and students. There are both religious-based schools, which tend to be owned by Christian organizations and secular schools run by the municipality or other associations.

All told, there are 78 folkehøgskoler across Norway offering over 300 themes including theater, sports, dance, arts, media, music, outdoor life, gaming, dogsledding and more. Around 7,250 students enroll each year, with the smallest school having 40 students, and the largest over 200 students. Campuses may be situated in rural settings or cities. Each school usually has one main linjefag or core curriculum and several elective subjects. Then there is fellesfag, which is a common subject that everyone takes part in. Attendees are mostly from Norway, so it is a great place for international students to be immersed in Norwegian culture and language. Around 10 schools offer instruction in Norwegian language. The current folk high schools were founded between 1868 and 1991.

Typical age range for folk high schools is 18-25, but the schools are actually open to all ages and educational levels- they are for all “folk.” The school year runs around 9 months (August to May) and may include a variety of activities, including large and small trips. Study tours could be with other students with the same major, or the entire student body, even to far-flung places such as Australia, China and the U.S. There are no tuition costs, but students pay for room, board and excursions. This year of self-discovery will set a Norwegian back an average of $12,000, and more for international students. Students come from all over Norway and generally have one roommate in a dorm room setting. Meals are eaten together, and relationships form quickly, since most of one’s time is spent with the same 50-100 people, night and day.

Learning is done through both traditional and unorthodox channels: courses, lectures, field trips, group projects, and social events. Rather than a report card, students receive a certificate that summarizes which subjects were studied, and how many hours were spent in major or elective courses. Some students use the year to study something totally different from their university path. Others launch from folk high school right more prepared and confident for their first year.